Stone Temple Pilots Singer Dead–Addiction Battle Over – SubstanceForYou.com
Hope Is Our Substance For You
Cart 0
|
Cart 0

Sources have confirmed that the ex-lead singer of The Stone Temple Pilots and Velvet Revolver passed away on his tour bus late Thursday night, December 3rd, 2015. Weiland was on tour with his new band, the Wildabouts who were scheduled to play in Minnesota on Thursday. It was roughly 9 pm when Weiland passed away.

Weiland had been battling addiction for many years, starting back in his early teens. Parents of Weiland divorced two years after his birth. Also at the age of 12 Weiland was sexually abused by a much bigger, older classmate. This is when Weiland—still in school—started abusing drugs and alcohol. This brought on many mental health ailments as well. Weiland was known to suffer from bi-polar disorder, which made life on his wife difficult.

Weiland was convicted of buying crack-cocaine in 95’ and was plagued by DUI’s. But, this was just the small part of his addiction battles. Chronically battling overdoses and bandmate disputes, Weiland had been battling addiction for many years. He struggled and struggled, entering rehab many times, but until recently his struggles were silenced.

Although sources will not confirm what his death is related to, they will say that Weiland passed away in his sleep. Now Weiland will rest in peace and won’t have to battle the addictions that plagued him for years, anymore.

The band had recently seen it’s time with Weiland, eventually firing him—most likely due to the substance abuse—and replacing him with Chester Bennington of Linkin Park.

Velvet Revolver—fronted by Weiland—contained joint members from Guns N’ Roses (Slash (Guitar), Duff McKagan (Bass), Matt Sorum (Drums)) and Dave Kushner formerly of Wasted youth. The band was short-lived, but not before making a huge splash back for traditional hair metal and grunge alike, with songs “Slither” and “Fall to Pieces.” 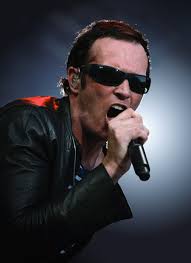 “Fall to Pieces” shows Weiland iconically in the music video battling an overdose before going on stage. This wasn’t before his friends from the band rushed to his aide to try and revive him back to health. If suscpicions are correct then, this very sceneario played out last night around 9 pm. We can only speculate until a media release is given, but with Weiland’s years of struggling and depictions of overdoses through music and life, we can speculate close to the truth.

I think that the best thing for us to do is to go rock out some Stone Temple Pilots or Velvet Revolver, hold up a candle and head-bang to one of the most iconic rock and roll front men of all time. As any recovering addict should do, we must wish Weiland peace where he is now, no longer suffering from addiction. We must wish solace to his family and loved ones. And, we must hope and pray his musical counterparts are there to attend his final farewell with a big musical salute to this true icon. We hope they can keep rocking not in spite of Weiland, but for his memory to remain in tact as one of the most influential singers to come from the Grunge/Rock era.

As we see here, addiction doesn’t discriminate. It takes people of all social, gender, and racial classes. Weiland wasn’t the first to be battling with addiction (as sources are still unconfirmed to his official death). But, it’s safe to say this, may whatever God you believe in give you peace now our brother. You are no longer struggling and can rest soundly now, as the sounds you’ve provided us will go on to last a lifetime, and more.

Please re-share this in efforts to let our brothers and sisters know that addiction does not discriminate, but to also cherish the memory of one of music’s greats. Give the world a peace of mind knowing that Weiland’s music is still in remembrance, as he will always be in our hearts. We can rest safely, as he is now, knowing that the addiction to stricken his life is not preying on him anymore.

May we bring health to his family, loved one’s, friends and bandmates. And to all of the fans of Weiland, we wish you a solace time of mourning. Share this to let the world know that no one else has to die battling addiction, but can find recovery and sobriety. It will continue, but maybe by sharing this it can shed some light that: 1) This battle is real for each and every person 2) Recovery is waiting if you want it 3) We are ALL here for you