My Personal Experience with Salvia Psychosis – SubstanceForYou.com
Hope Is Our Substance For You
Cart 0
|
Cart 0 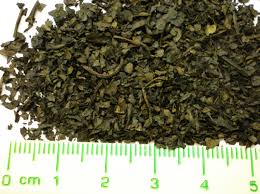 Salvia (Salvia divinorum) is a herb in the same category as mint leafs.  It can most commonly be found in Southern Mexico. It’s used to give the user hallucinogenic experiences. In most cases, it’s found in a little carrier case.  The case looks like it would hold contact lenses and is usually colored/multi-colored. The smell Salvia produces is that of a chamomile tea, and looks ground finely, compared to marijuana. Photo Courtesy of en.wikipedia.org

How Do You Use Salvia?

Salvia originated in use was by chewing the fresh leaves or drinking extracted juices. If the leaves are dried you may also roll them into joint papers, grind it into smaller pieces and put it into pipes/bongs or other smoking devices. It may also be vaporized and inhaled. In most cases, it’s used for individual experimentation. When marijuana cannot be found, Salvia was a go to in the early 2000s. It was sold in tobacco shops. Now K2 and Spice has taken over. In some cases, Salvia is mixed with marijuana, prolonging the hallucinogenic effects and creating an increased buzz off of the drug. Salvia is not considered a social drug but more of an experimenter’s drug. This is due to that fact that the effects are short lasted but are most closely mimicked to “psychosis” in the user. Photo Courtesy of Beuterre.org

Salvia’s Effects to the Brain 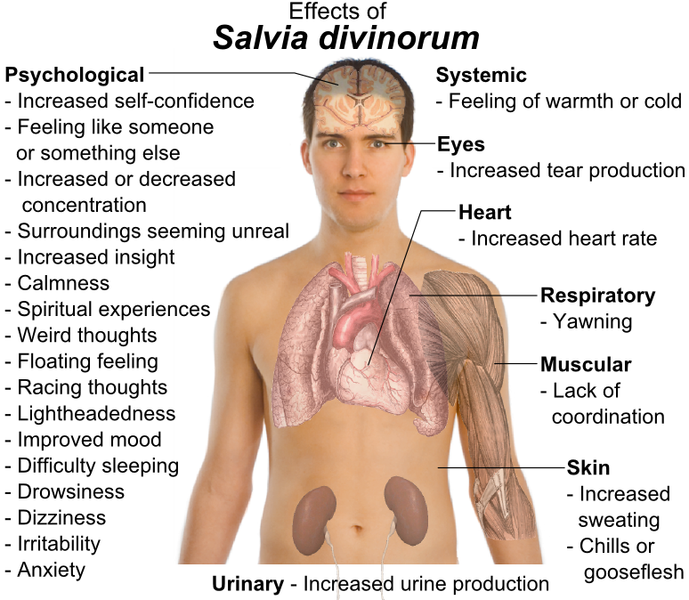 • Active ingredient is salvinorin A • It’s a strong activator of nerve cells called kappa opioid receptors (different than the commonly found receptors in drugs like morphine and heroin) • It doesn’t act as a Serotonin receptor-like most hallucinogenic drugs such as LSD or psilocybin (Mushrooms) • The effects are short lived • The effects are extremely intense • The effects come on in less than one minute • The effects last upwards of 30 minutes • With use, visual perception changes (psychedelic changes) • Alters mood sensations • Alters body Sensations • Creates mood swings • Creates a detachment from reality • Perception of reality is severely altered • You are unable to interact with one’s surrounding environment Photo Courtesy of commons.wikimedia.org

My personal experience with Salvia- What was it like? 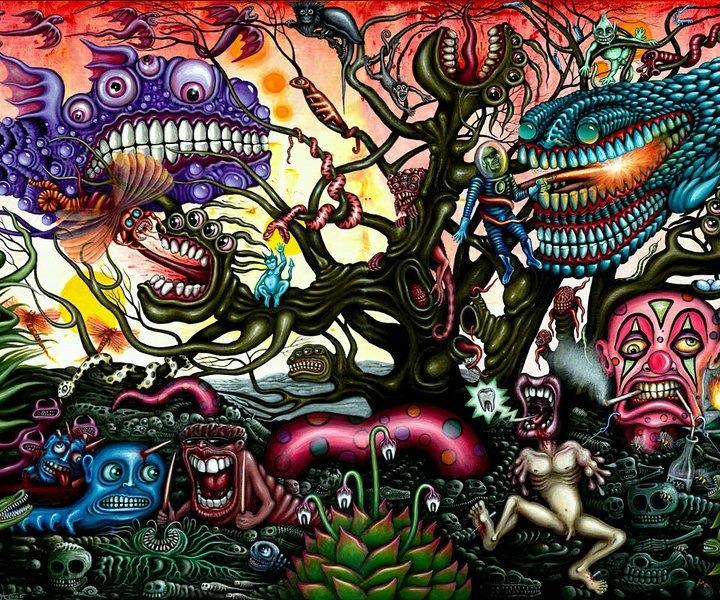 It felt like the peak of an acid trip—which usually lasts much less time than this—for dang near thirty or forty minutes.

I wound up finding myself hanging out with the local high school hoodlum gang. I was about seventeen years old and heavily into pot. The group and I had been hanging out in the back of the alley in the pines nearly all day. We had, by then, smoked all of our weed and couldn’t find any other sources to get any more.

The oldest of the gang was in his twenties, so he was old enough to walk into a tobacco shop and not be questioned. He had a beard so there wasn’t even a chance that he would get IDed. He even had a job and some cash.  So, he offered to pay for whatever “round” was next on the table.

He walks into the tobacco shop after our seclusion in the pines. We had now seen the moon glow upon us from the shadowy depths of our sap-soaked hooded sweatshirts. Weed wasn’t available, so now I’ve been introduced to Salvia.

Salvia came in increments of 20X, 40X, 60X, and 80X.  It was in little purple containers. They had the shape of what you would put your contacts lenses in. There wasn’t that much leaf.  It was extremely ground up, almost finite. I reached in to sniff it and it smelt like pure chamomile tea.

I drove us all back to the hoodlum’s trailer.  We sat on the side of the road in my car. It was parked and the keys weren’t in the ignition, I wasn’t driving under the influence. At least I did something right so far.

The hoodlum’s girlfriend brings out a glass pipe and a bong. I was told that on your first time you’re supposed to only do 20X because the peak would send you into a psychotic break. I tested my boundaries though. We ripped open the 80X container and packed a bowl and then another.

Between the five of us we smoked four bowls and has resin from the marijuana left over too. On top of doing 80X I was informed you only need one hit to experience the “Trip.” Four bowls later I was psychotic.

It took about thirty seconds to hit but I couldn’t feel the peak of Salvia until about six minutes in. There were two phases to the drug and I was now in the psychosis part.

I remember pulling my keys from the ignition of my car that was turned off and throwing them to the floor screaming, “I AM SANDMAN!” I pushed my seat back, or so I thought I did, and drooled out at the nightlife in front of me. It felt like I was falling back into an infinite number of infinities. I hope that makes sense…

I couldn’t control my body’s reactions and was completely com-bobbled  I felt like I was in an anti-matter lab and my body was the experiment.

There was a real sense of “outer body experience.” I was floating in space or just nothing at all, it was hard to tell. For my perception it was a completely different thing.

I looked out the rear of my window as the road was winding up from the ground into the tip top of the air. The road turned from solid concrete to a flowing river gravitating towards the heavens. I remember calling it “Denial.”  I called it Denial because of the shock I was in.

There were cars to my left and cars to my right but all I could see were Tonka structures. Yes, that’s right the world (besides the river) had now turned into a Tonka reality. The steam engine to my left was astronomically bigger than the bulldozer to my right. There was a heightened sense of yellows and greens, some blues were apparent. You know how they say, “I see stars.” Well, I was really seeing specks of starts outlining the atmosphere around.

My perception of reality was screwed and now I couldn’t feel my mouth, lips, tongue, or feel myself taking breaths. I remember screaming, “I can’t feel my tongue!” as the rest of the people in the car said, “You’re talking just fine!” They couldn’t control their laughter! They were now in Phase 2 of the Salvia.

I started to drool, as a lot of people on Salvia do. It wasn’t attractive! After the psychosis effects wore off there was a sense of uncontrollability with a heightened sense of humor/laughter. The peak of my acid-like trip was coming to a halt I didn’t come down completely or as slowly as I wanted. I’d known what I had done, but now, I was finding what I did to be funny. I was in this form of shock.

My shock was set off for about fifteen total minutes and I remember afterward my face hurt. My face was beating red—blood pressure probably through the roof—from an uncontrollable laughter. The chronic laugh almost felt sickening more than funny. We (in the car) would crack up at anything. I remember someone getting the glass bowl thrown at their forehead and creating a bruise. There was a little bit of blood, but all we did was scream and howl with a sickening laugh. The car sounded like a gang of hyenas.

We all began to cry from the laughter, but I couldn’t tell if it was a desperate sad laugh or another psychotic break. Thirty minutes later I was sober and smoked another two bowls.