Everything You Must Know About K2/Spice – SubstanceForYou.com
Hope Is Our Substance For You
Cart 0
|
Cart 0

“Spice” is an assortment of herbal components that are combined together to give the user a similar experience to marijuana (cannabis). Spice is marketed as a safe and a legal alternative to marijuana. The chemicals that it’s composed of are labeled specifically: “Not for human consumption.”

The ingredients include things such as dried, shredded plant material and chemical additives mostly found in incents and potpourri. These chemical additives give off a psychoactive and mind altering effect that is stronger than THC, or the chemical makeup of marijuana. They may be designed as “safe” or “natural” on the label but this is completely FALSE ADVERTISING.

The chemical analysis of Spice shows that the active ingredients are synthetic and designer cannabinoid compounds. It’s like spraying potpourri and incents with pesticides–like you would vegetables–increasing health risks more than what is already there. Spice binds to the same cannabinoid receptor agonists as marijuana. But, there is however, many unlikely additives and unwanted psychoactive components creating many unwanted side effects.

The K2/Spice breaks down into smoking a chemically devised incense or room odorizer; like potpourri.

The K2/Spice falls into seven major medical structural groups (resource provided by emcdda.europa.eu go here to find out what these chemical components mean in laymen terminology):

For more on these chemical compounds please go to- http://www.emcdda.europa.eu/publications/drug-profiles/synthetic-cannabinoids

There are other chemical compounds in the makeup like oleamide.  Oleamaide is an endogeneous substance used in plastic manufacturing. These chemicals have prolonged half-lives, which means the drug stays in the system longer and therefor administering psychoactive affects longer than a “normal” high.  This can be extremely dangerous if given a negative side effect or potential overdose.

A half-life is how long the effects of the drugs take to diminish from your system. If there is an 8-hour half-life on a drug, in eight hours the drug will be half of that and then in another 8 hours half of that and so forth until the effects are unnoticeable. The problem with drugs is that once you do them you’re only waiting for the half-life to diminish to a point to where you cannot feel the effects anymore.  Therefor this leaves it detectable in testing of hair follicles and DNA testing.

Like the saying goes, once you try it once….

This is why comparatively to real marijuana or any drug, Spice–with a longer half-life than most any other drug–is extremely dangerous for its psychoactive effects, especially when poisoned, overdosed, or experiencing negative side effects from the drug. 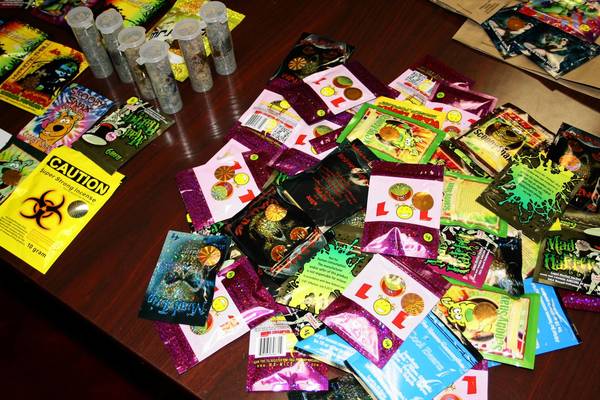 There are many nicknames for this drug but to name a few there is:

These products are so closely related to potpourri–which is a decorative and fine smelling additive for your household–that it’s hard to mistake this drug for when someone wants their room to smell good or they’re actually smoking it. It’s in such close regards to marijuana that Spice is abused mostly by smoking–the quickest way to medically get you high–and sometimes even mixed with marijuana itself. Other ways of implementing Spice into your body is through an “herbal infusion” for drinking; the same way marijuana is mixed into teas and coffees, or even homemade energy drinks and cocoas.

Spice comes in small pouches in increments of 1.5 grams to 10 grams on an online source that I had found distributing the drug.   They’re selling the K2/Spice for $5.21 per gram. This price is considerably lower for a drug that’s said to be 100 times stronger than actual marijuana in its psychoactive effects.

Although Spice is 100 times stronger in its effects of marijuana it cannot be detected in a urine analysis test for drug abuse. (Stated by DEA Spokeswoman Barbara Correno on CNN link here- http://www.livescience.com/26883-synthetic-marijuana-proves-deadly.html)

The going price for a gram of medical marijuana—or street marijuana in this day in age—ranges now from $15-20 a gram. Medical marijuana has jacked the prices up of street marijuana to this same potency since hydroponic stores are now in an influx around every state.  This goes to encouraging caregiving in the legalized states and to grow and create a bigger influx of illegal distribution for “money on the side.”

Effects on the Brain

There has to be effects on the brain that are more prone to obstruction than regular marijuana right? Yes!

In a University of Michigan study it went on showing 11,000 emergency room visits in 2010. One third of these visits included teens between the ages of 12-17. Not only is poison control and ER rooms getting a run for their money but so are parents of these many youth that are being affected by the legal Spices.

As told in DrugAbuse.gov (article here- http://www.drugabuse.gov/publications/drugfacts/k2spice-synthetic-marijuana):
Spice users say the experience to Spice is similar to that of marijuana itself. It gives a heightened sense of mood, a sense of relaxation, and an extreme altered perception of reality. Since the effects of Spice—as seen above—are 100 times more potent than marijuana, we can see how much Spice is actually affecting the brain.

In some effects, some users are reporting psychotic events, extreme anxiety, uncontrollable paranoia, and mind-altering hallucinations. Spice as it is stronger than marijuana combines with the brain and produces sometimes, and most times, unpredictable side effects. As people are being taken to poison control centers for the aftermath from a bad use of Spice there are many symptoms reported with negative side effects. These side effects include increased and rapid heart rate, uncontrolled vomiting, severe mood instabilities and agitations, dissolution and confusion to the persons, and mental hallucinations.

Other side effects of spice can be serious. These side effects are things like a raise in blood pressure. This will reduce the blood supply to the heart and brain. This is known as myocardial ischemia. When there is a lowered supply of oxygen to the brain and heart it leaves room for artery clogging in the blood vessels, and leads to things such as aneurisms, heart attacks, seizures, and strokes.

Addiction and withdrawal symptoms are common in Spice abuse.