A Silent Epidemic: Male Eating Disorders – SubstanceForYou.com
Hope Is Our Substance For You
Cart 0
|
Cart 0

I find it interesting, however, that the highest rate of eating disorders among men is actually eating disorder not otherwise specified (EDNOS). This means that most men with eating disorders have symptoms that fit into more than one eating disorder diagnosis category but not enough to be given that diagnosis. It means that they have signs of multiple eating disorders, not just clear-cut signs of one particular eating disorder. EDNOS diagnoses in men may account for the fact that a lot of men are looking to achieve a fit, bodybuilding body type. The media portrays women as thin and men as muscular, V-shaped and athletic. Along with binging, purging or restricting their diets, many men are now misusing protein/nutritional supplements, abusing steroids and are over exercising in order to achieve this ‘masculine’ body ideal. Because these symptoms and behaviors do not fit into one particular eating disorder category, this means that many men get an EDNOS diagnosis if diagnosed at all. I truly believe that many ‘professionals’ would consider this ‘normal’ masculine behavior and would not associate it with disordered eating behaviors. However, these types of unhealthy actions are disordered and can be seriously harmful to the individual. 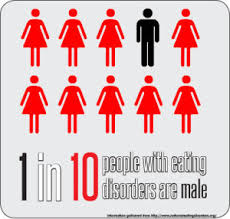 It should be noted that not all male eating disordered individuals are gay, but gay men do make-up approximately 42% of the men with eating disorders (NEDA). Although there is nothing wrong with having different sexual orientations, there is, unfortunately, a stigma around this, as some men do not want to be perceived as being homosexual just because they have an eating disorder. This is just another reason why the stigmatization needs to be taken care of. A new diagnosis would eliminate some of the stigmas surrounding male eating disorders.

Although it is unfortunate that men feel they cannot come forward and seek help when they suffer from an eating disorder, there is hope for prevention and treatment. Just like treatment is available for females, males have the same options should they be diagnosed with an eating disorder. NEDA recognizes the importance of understanding the difference between male and female eating disorders. NEDA also understands the different struggles men have to deal with when facing an eating disorder like gender role conflicts, stigmas surrounding mental health, and misdiagnosis. The NEDA website (http://tinyurl.com/o7t9nlx) also gives some tips for enhancing male body image. Some of these tips include being aware of the negative messages you send yourself, remembering that body type does not equal worth, focusing on the qualities you do like about yourself, and surrounding yourself with friends who don’t use body size and shape as determinants for worth.

It is important for men to find treatment options that understand the difference between males and females in terms of eating disorders. Although they have many similarities, the struggles are also different. Treatment should be tailored to the individual, not generalized for everyone. It is also important for the rest of society to realize that gender should not matter when treating mental illnesses like eating disorders. Eating disorders don’t discriminate based on gender and neither should we.

Thank-you for reading. Any comments, questions or concerns can be directed to my Twitter @JordynDalton or @SFYGuestBlogge